came across this interesting article on this blog called what’s the way it is.  the title of the post is called hardest straight-in pool shot.  i’ve reblogged the entire article below; enjoy!

Mathematics and geometry feature prominently in the game of pool. Recently a clever guy named Rick Mabry figured out something interesting about the game using mathematics and trigonometry. His work was published in a minor scientific journal as reported in New Scientist. It’s actually a bit surprising, somewhat useful to players, and even a bit magical in some sense.

Update: after some added diligence I located the full paper online here and reviewed it. I’m not competent enough to question the math. That seems correct to the degree I can verify. But I do question the result. I’ll leave my summary of the paper intact for now and include my counter-argument at the end of this post. 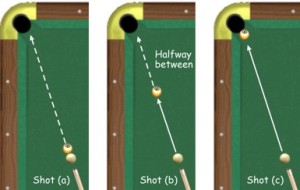 Most casual players assume that the easiest pool shot is a straight-in shot. Fair enough. The straight-in shot eliminates the judgment involved in deciding how to aim cut shots. But not all straight-in shots are the same. The object ball can be located right next to the cue ball, shot (a), right next to the pocket, shot (c), or anywhere in between. Rick Mabry used some basic trigonometry and math to determine which of these shots was hardest and easiest.

If you assume you can shoot the cue ball with perfect accuracy like a laser, the result is simple and wouldn’t surprise any pool player. The easiest straight-in shots are when the cueball and object balls are closest together, shot (a), and when the object ball is closest to the pocket, shot (c). The hardest shot is when the object ball is halfway between, shot (b). This result is so obvious that it’s hardly worth the effort to prove. But there’s more.

Rick Mabry didn’t think that was a very interesting result either, so he tried a more realistic analysis. He extended his calculations for a shooter who is not perfectly accurate. This affected the result, and in an amazing way.

At first glance 1.618 seems like an odd result, and not one that a pool player would ever come up with on their own. But in fact, it’s a very famous and interesting number. The actual value is (1+sqrt(5))/2 or 1.6180339887… which is well known as the Golden Ratio. The Golden Ratio is found throughout nature in sea shells, flowers, and crystals. It’s been used by painters, architects, and musicians for ages to achieve proper aesthetics. Now we find, it’s integral to the game of pool.

We can use this new knowledge in a few ways. First, when we have ball in hand, especially with the cueball in the kitchen, we can know NOT to position the cueball from the object ball by this ratio, otherwise we’ll be unnecessarily making the shot too hard. Another more clever use is when playing a safety. There could be situations where we intentionally leave this hardest straight-in shot rather than something easier. And finally we come to bar bets. We could bet a player that they couldn’t make as many shots from this position as from the midway position. Given enough shots, we’d be sure to win our bet! I’ll have to put that to the test before recommending it for real.

I wrote the above summary based on information I gleaned from the article in New Scientist. Such summaries of published papers are often wrong or include misinterpretations of the research. I located a copy of Mabry’s paper online, reviewed it directly, and tested the conclusions on a pool table. Then I used my own math skills and more formidable computer skills to test the results. Unfortunately my conclusions were different. I don’t feel like I have a firm enough grasp of Mabry’s paper to point out exactly what’s wrong, but I’m confident in my own results so I’ll share them.

First I rushed out to do some experimentation. I have some credentials in pool having played competitively for over 20 years at a respectably high level. I shot a few hundred straight-in shots on a regulation table. It’s a practice drill I’m well-acquainted with. Straight-in shots may be considered the easiest, but in fact they exacerbate the slightest errors in alignment and cuing, moreso than any other shot. I soon got a feeling of certainty that the midway shot was the toughest. If anything, placing the object ball further from the cueball, made the shot harder while moving the object ball closer to the Golden Ratio point made the shot a bit easier. It wasn’t a scientific experiment, but it was clear enough to motivate me to delve into the math.

I found the original article and read it. It was confusing. The math was mostly simple (at least the trig, my calculus is long gone). But Mabry’s definition of difficulty was a bit confusing and his discussion of some of his techniques confounded me. The main issue I had was understanding what the difference was between his two cases (1) a shooter who was perfectly accurate and (2) a really bad shooter.

My analysis is more straight-forward, and I think easier to explain and justify.

First I’ll define shot difficulty in a way that I think is more standard and quite a bit easier to understand and work with. Ignoring subtleties like spin, throw, cloth, balls, humidity, and so on, and sticking solely to the geometry as Mabry does, I define the difficulty of a shot as being directly related to the greatest permissible difference in angle that you can strike the cueball and still make the shot. An easy shot is one in which you can hit the cueball at a largely incorrect angle relative to the true aim line and still pocket the ball. A hard shot is one that you can only be off by a hair. For any shot you can lay out, there’s an ideal aim line. If you deliver the cueball along this line, the object ball will be sunk in the center of the pocket. And each shot has what I’ll call an “error angle” in each direction. If the error angle is one degree, you can strike the cueball in the wrong direction by as much as one degree and still make the shot. Thus if the error angle is greater, say two degrees rather than one, it’s an easier shot.

My calculus is rusty so rather than deriving a formula for the a-to-b ratio that results in the hardest shot (meaning smallest error angle ß), I instead used a spreadsheet. I kept the full distance a+b constant at 60″ and varied a and b. At the midpoint a=30, b=30, ß=0.347 degrees. Surprisingly, the hardest shot was not at a=b, not at (a+b)/b=1.618, not even a < b, but rather it was about an inch and a quarter nearer the pocket than a=b. That small offset has to do with the geometry of the collision. But the logical conclusion, to a practical estimate, is that the hardest straight-in shot is really about midway between the cueball and the pocket. And it seems to agree with experience.

2 comments on “Hardest Straight-in Pool Shot (via What’s the Way it is?)”