i have been particularly inspired by this recently.

in an effort to emulate the very relaxed kitty, i decided to go about my own r & r.  which involves eating.  oh how i ate . . .

i have a fondness for pho.  something about the soup and noodle combo, it just soothes the soul . . . or something sappy like that.  but i’m not satisfied with regular pho, no sirree; i need the more exotic pho.  so i ventured out and found duck pho.  yes, you heard it right.  duck.  pho.

typically, pho is made with beef or chicken, and occasionally seafood, at least the ones you find in the US.  but sometimes a shop would buck the mundaneness that is the beef or chicken pho and offer an alternative for the more adventurous soul––enter duck pho.  the shop i found only makes it on weekends, making this quite a treat. 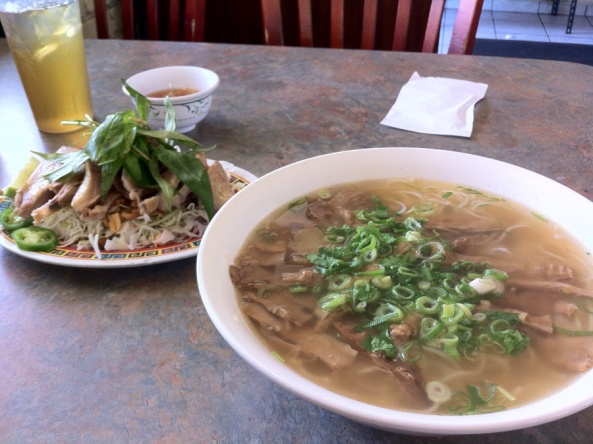 this is what i got after i ordered.  behold, the mighty duck pho.  as you can see, the duck and the noodle/soup arrive separately.

a close-up of the noodle/soup bowl.  inside are green onions, bamboo shoots, and noodles.

a close-up of the duck.  the pieces arrive on a bed of garnish, as well as herbs, chili, and lime for the soup.  underneath the duck are fried shallots and fried peanuts.  now the herb is not basil like you’d normally get; unfortunately i don’t know what herb it is.  it tastes slightly bitter and quite grassy, with some earthiness to go with the above flavors.

this is the dipping sauce for the duck.  i think it’s fish sauce, white onions, and a bit of chili.

anyway, since i’ve never had duck pho before, i didn’t really know how to attack it.  so i put the duck pieces into the soup to warm them up, and started dipping the pieces into the sauce before devouring them.  whaddaya know, it worked.  the duck was a bit chewy and rich, but the green herb served as a great counterpoint to the duck’s richness by kicking it right in its flavor gut.  okay, i have no idea what i just said.  what i mean to say is that the duck and the herb balanced out nicely.  the addition of the dipping sauce created a wide spectrum of flavors in one bite: sweet, savory, bitter, slightly sour, and rich all at the same time.  i hear that in vietnamese cuisine a multitude of flavors are employed in one dish; if that is true, this duck pho exemplifies that cooking philosophy.

for those of you who have had duck in asian eateries, you know it takes a bit of work.  when the cook chops the duck with the giant cleaver, the bones shatter into hundreds of tiny pieces that you would have to pick out, unless you don’t mind a bloody mouth after.  just like many good things in life, you gotta put in some work for the end results.  (hey, exactly like pool!)  btw, this is not the posh restaurant style duck where you only get the duck breasts; no sirree.  you get roughly a third to a half of a duck, with skin, bones, meat, fat, and tendons attached.  you want duck?  you get the whole thing.  no sanitized version here, baby.

the soup, surprisingly, was not heavy at all, even though i could see the layer of oil floating on top.  (sabor, baby!)  it was light on the palate with a hint of sourness.  quite a combo with the duck, i must say.  i am assuming the soup was duck broth, but i didn’t ask the nice folks at the eatery.  it sure didn’t taste like beef or chicken broth to me.

so, is this a good pho?  i think it is, but after tasting it i also know that this is NOT for everyone.  you must like duck, and you have to be willing to try new foods.  timid eaters should not sign up; regular beef pho tastes just fine.  now 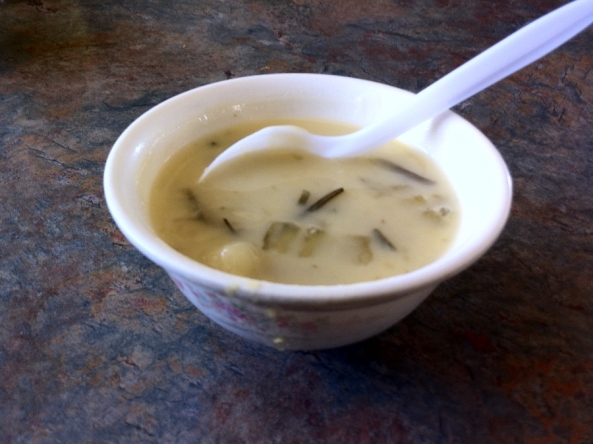 after you finish your meal, you get a free house dessert.  this is called che, i believe.  it’s coconut soup with small rice balls, sweet potato cubes, and seaweed pieces.  standard vietnamese dessert but very good after the pho.

the duck pho is making me look forward to the weekends.

this monstrosity contains shaved ice, various fruity syrups, condensed milk, and coconut ice cream (buried underneath).  surprisingly, the shaved ice was very refreshing; although sweet, it was not cloyingly so.  the coconut ice cream was low grade and didn’t taste very good, but it wasn’t bad either.  there was a lot of shaved ice and ice cream, and i couldn’t finish the cup.  bummer.

lately there has been a mini invasion of sorts by a couple of east-coast eateries.  let’s start with jersey mike’s.  according to the website, jersey mike’s started off in new jersey back in 1956.  today, the franchise has over 600 locations throughout the US.  according to the company’s map, they have about 74 stores in california, although i’ve never seen one in socal.  i like a good sub, so i went there a few times to sample the goods.

i’ve had a few different subs at jersey mike’s, so i don’t remember which one is which.  i think this might have been the italian, but don’t quote me on it.

not sure which sub this is.  sorry.

this i remember (yay!).  jersey mike’s offers hot and cold subs; this is their take on the philly chesse steak.  not bad, but i’ve had much better cheese steak sub elsewhere.

i think this is the turkey club with bacon.  i think.

jersey mike’s subs are deceptively big.  their breads are wider and slightly shorter than typical subs, so they don’t look as big as, say, the subway foot-long.  but once you eat it, you will get full quickly.  buy the large only if you’re famished.

the thing i like about jersey mike’s is that they slice your meats when you order; no precut stuff for them.  granted, hand slicing your meat is done in just about any deli shop, but you don’t normally see this at typical submarine chain stores like togo’s or quizno’s.  it may be a gimmick, but i like it.  hey, beats the s~* outta subway.  oh, and jersey mike’s sweet tea is doable too, if you’re into the southern sweet tea.

not to be outdone, strickland’s (no relations to earl) frozen custard decides to make an appearance.  according to the website, bill and florence strickland started the company in 1936 in akron, ohio.  lemme quote this from the website: “With his formula perfected, Bill turned his attention to finding an ice cream machine that would quickly freeze the ice cream, while limiting the air whipped into the product.  The result was Strickland’s award-winning frozen custard.”

sounds tasty.  one day i was visiting friends in the area, so off i went.

on any given day, strickland’s will make three to four flavors only: chocolate, vanilla, and one or two “flavor of the day” specials.  on certain holidays they’ll make holiday-themed flavors that day, e.g., green frozen custard for st. patrick’s day.  from there, they can turn the frozen custard into cones, cups, sundaes, splits, shakes, floats, frozen drinks, or whatever you want (within reason).  the picture above was the hazelnut frozen custard, one of the specials that day.  as you can see, the consistency is very dense.  incongruously, the frozen custard melted right away once i put it in my mouth, and it was very creamy.  i think this tastes better than the traditional ice cream.  should’ve ordered a large.  (alright, start with the dirty jokes.  go ahead.  i know you are dying to make them.  bastards.)

so these are some of the things i ate recently.  and i’m slowly getting back to pool.  just taking my time.

one more thing.  see if you can guess what this is. 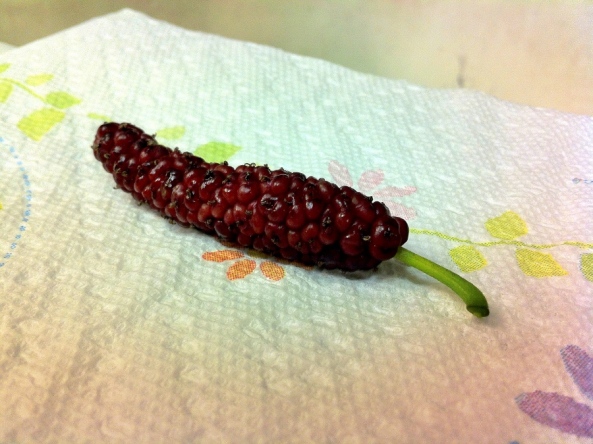 on a separate note, one willem chuckles showed up at my fave PH recently to foist some crapware on unsuspecting folks.  while i was there i did not see any takers, even after chuckles’s repeated announcements over the PA system.  😛

4 comments on “the unbearable lazy fatness of being”